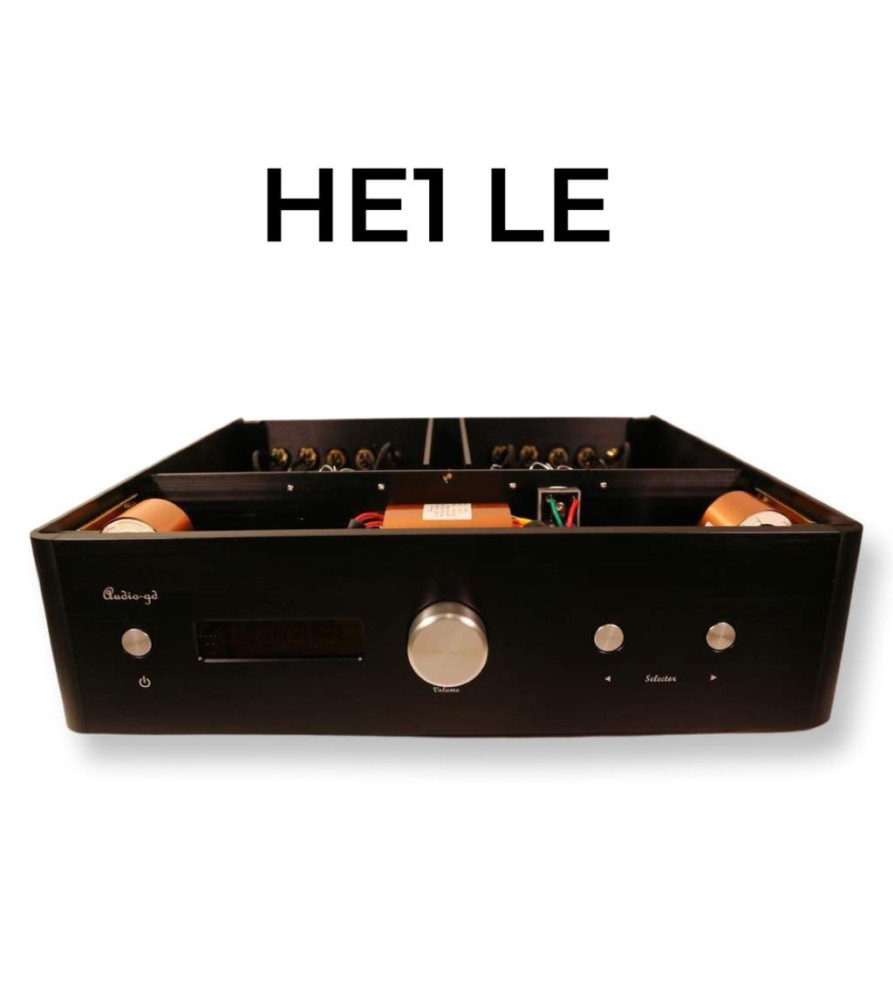 Fully balanced Class A design built from discrete analog stages with no OPA or coupling caps in the signal channels.

It uses three R-core transformers (total 145W) and audio-grade NOVER capacitors of over 36,000 uf are used to ensure wide and smooth power delivery.

The relay-based pre-volume control of the 9-phase four-channel digital controller can control the input level of the source from 0DB (Bypass) to -8DB.

Two gain modes, the high one has 16DB and the low one has 6DB, for more flexibility.

3 Outputs: XLR / RCA / ACSS (ACSS and XLR / RCA have separate output circuit design so you can connect 3 power amplifiers at the same time).

HE-1 LE balanced applies the brand new ACSS design. It sounds complex, but it actually represents the simplest design the Hi-Fi world has ever had. The HE-1 LE integrated amplifier has a single "voltage" gain stage to process signals, but operates in ACSS mode, so in effect it is a current gain stage instead of voltage, while normal OPA chips do already include two or three stages. The simpler and shorter signal travel brings out the more neutral and less colorful sound.

HE-1 LE applies a very low distortion single-stage ACSS amplifier soldered directly to the motherboard. The gain stages and the diamond cross output stage work in pure class A state.

ACSS is a feedback-free technology built with fully discrete amplifiers. Most people know that global feedback design can offer better specs in test measurements while non-feedback can't work well in measurements, however it can offer better sound for human ears. ACSS offers a new field, as it can deliver a sound with minimal colouration, more neutral and with very low distortion and high linearity. So it can keep dynamics, details and neutral sound without sounding bright or harsh.

All the signal gain is current, obtained from the unique and superb open loop multiple output current mirror. The result is an incomparably precise and ultra-low distortion of the gain signal. The signal path is fully balanced and all transistors operate in class A mode.

Volume control with I / V conversion, can keep the signal frequency band flat and not miss any detail. It cannot degrade on the sound quality in every volume level. After the loudness, there are four groups of non-feedback buffer stages that offer very low output impedance.

A four-channel digitally controlled relay based volume control is applied in our project. This machine has four total channels and uses DALE resistors to control the volume to avoid unbalanced channels.

The volume control has 100 steps, the control range reaches 90DB, a very easy control range on the first 50 steps, cooperate with a gain and evato of 20DB, so it can easily adjust the volume for headphones and speakers both high and low.